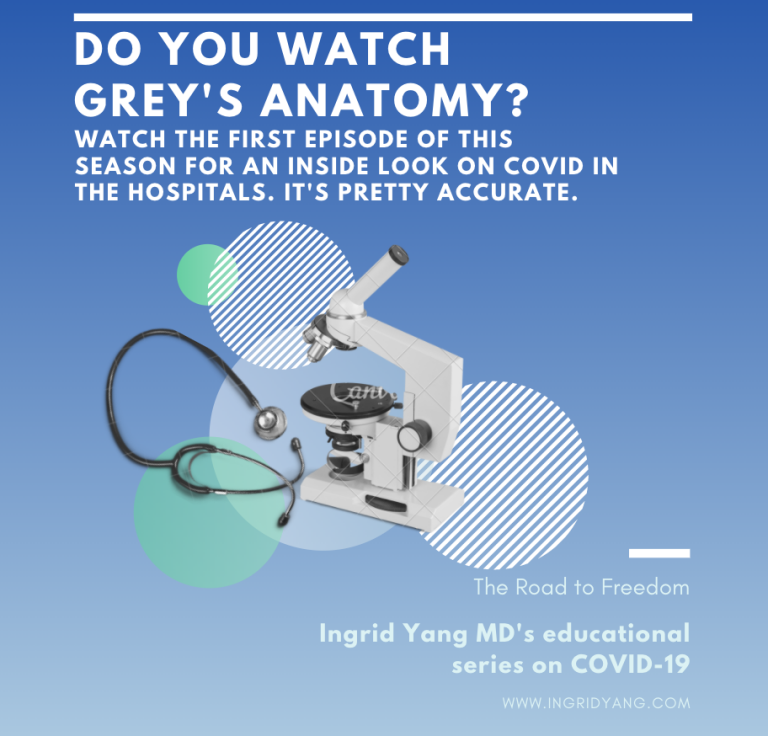 For those of you that know me well, you know I’m an avid Grey’s Anatomy fan. Not for the medicine – that is usually quite inaccurate. But for the fun drama, and the very deep life lessons. But the first episode of this season (Season 17) was extremely compelling and incredibly accurate. It gives you an inside look to how truly devastating this pandemic is.

At one point, the main protagonist, starts listing off the names of patients that died that day. She says of one of her colleagues: “He was fine yesterday. Became hypoxic an hour ago… it’s the fourth patient I lost today. And they are all dying alone.”

This is almost the exact dialogue that I had with acolleague in the hospital last week. This is real. And kudos to Grey’s anatomy for portraying it so accurately. At one point, she breaks down because her patients decompensate so quickly and she has no control over it. It is hard to watch, but it is what is actually happening in the hospital at this very moment.

I once called a daughter to tell her that her 66-yo father had died of COVID-19. She began to cry uncontrollably. But she kept repeating: “This is all my fault,” because she had contracted COVID while attending a backyard bbq and had passed it on to him (while asymptomatic) before she became outwardly ill. She thought it would be ok since it was outdoors, but she ended up getting it anyway. She gave it to her father, and a month later, he was gone. He died alone in the hospital.

I don’t know what the worst thing about this pandemic is – there are too many terrible things to count. But if I had to choose one, it would be that people are dying alone. No one should have to live through this, and we are. So, that’s why doctors and scientists don’t understand the cavalier attitude when people say that we have to open gyms or that they are entitled to go to restaurants. It’s not a right at all. You know what’s a right? Being able to say goodbye to your father in person as he dies.  But instead, he has to die alone.

So, if we can contribute in any way, however little, it is to be part of the solution, not the problem. It is our responsibility to do so. If you knew that your actions could keep someone from dying alone at the hospital, I believe you’d make the sacrifice. I hope you believe that too. I hope you live that. Because your actions truly do make a difference here.

And with that, I will leave you with this dialogue, which again, is painfully accurate to real life: Meredith: “Marvin Lindstrom just died.” Schmitt: “No, please no.” “I tried calling his wife. Are you with her?” “She wanted to say goodbye to him.” “I wanted that too, Schmitt.” “They were married 62 years.” “I held his hand while he died.”